The week of ups and downs

As the last week passed by, I’m probably over my low point of these three months. It was bad, worse, and worse. I started to loose interest in… well everything. But then out of the blue, just after my worst day, the next morning it was all gone, like it had never been there. Though it could have been a perfect week if you would only look at the events we had.

Let me start with the news, that I’m a proud owner of residence permit, finally! It was a long and tiring process, but the success was worth the energy. Actually I kind of liked the long hours spent at the police office and other offices. Now, we have a file there (so I must be careful from now on), and our pictures are in the family photo album, as I call it. (It contains the pictures of all the immigrants arriving to Sinop, which usually means Afghans, Iraqis, Iranians and Azeris) I’m pretty proud of my permit (it looks like a little book), sometimes I just look at it, if I don’t have anything better to do. The day we got our permits, we had dinner at Asli’s place. It was the best meal I have had in Turkey! And the whole thing just felt so good. It was like a little celebration. 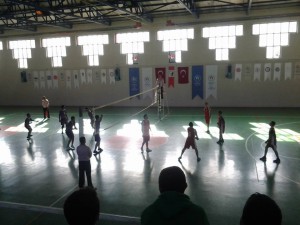 The following days there was a volleyball championship between the high schools in the region. That means we went to watch matches during school time. And they’re taking cheering really seriously! Well, I should have known by how they’re fighting on which football club is the better, but I was surprised, when I realized how it is going when the event is live. They were shouting, clapping, singing, so it was pretty awesome! And our volleyball team is the best, even if they lost one match! This is fact.

As the end of the week approached, I got better and better. I was so excited, ‘cause we started to arrange the concert which will be held in December just before our leaving. And I have to tell that it will be so cool! There will be Turkish songs, Hungarian songs, folk dances, short movies, so basically everything! My excitement only broke down a bit, when I had the opportunity to attend to a frog dissecting. This was in fact an experience of a lifetime, as I probably won’t get to another frog dissecting in the future, but still it was bit much for me. Not because I felt pity in general for the frog, because you know life is hard sometimes even if you’re a frog, so move on, but when I realized that its heart is still beating, that was the moment when I said thank very much, it was enough for me for the next two-thousand years.

But I didn’t let this experience ruin my day, as in the last few days-after a bit too long break-, I started to learn, and read again, and that was the point when I felt I was back in life again. Nowadays I’m realizing, that our trip is nearly over, and I should have done a lot more, so now, I’m insanely trying to do all the things I haven’t.

Fortunately, I have a funny story to finish my update with. On the weekend, on Sunday morning to be exact, we went to the nearest bakery, but not just the shop part, but the whole oven thingy, and we watched how our breakfast is baked. It was very interesting, and I even spoke with the baker. When he got to know that I’m from Hungary, there were two things he first mentioned about the country. Angela Merkel, and that there are a lot of donkeys. Yes, there are, I replied nodding.

Yeah, there are, unfortunately no biology lessons in Hungary where you get to dissect frogs… We did back home and worms and clams and I don’t remember what else.

I actually saw a video of your frog dissection lesson on FB!