The End is Nigh

This was a pretty average week, I hardly remember anything worth telling, though there were a few. Firstly, we started to edit our film about this three month journey, because it will be a part of farewell concert. Though sometimes we have troubles with the computer and the editing program, it is coming along fairly well.

We also started to rehearse the folk dances. Actually, I had a very pleasant surprise, when I entered the computer room (where we are rehearsing), because as I walked in I saw four boys from different classes and I didn’t even know all of them; they had come to dance with us. I was touched seeing them dancing. And though they had difficulties pretty much with every single step, they kept going on with a huge smile on their faces. It was really inspirational.

The weather turned a bit cold at the beginning of the week, which is not that surprising considering the fact that it is the end of November. What I am trying to get at is that the heating system is not the best in our house, well, in my room so I made up a good way to heat my room, which called “Skype disco”. To apply this strategy you’ll need a few friends, skype with webcam, earphones, and dynamic music at full volume. I guess you can figure out the rest on your own. And it worked pretty well, but after a few days I rather decide to stay in the living room which is heated. And I was stuck to my laptop, because I waited excitedly to hear from my family about their trip to Vienna, and the award ceremony of the short movie competition.

But during that,  life didn’t stop for even a second. On Wednesday I had some culinary experiences as I tasted traditional Turkish coffee for the first time, which wasn’t as bad as I had expected at first. And I also tried a fruit called heirloom, which I could explain you as the lovechild of a tomato, a pumpkin and a peach (what a night that could have that been!). It was good though.

Also the weather turned better at the end of the week (and by that I mean 18-19°C), so on Thursday I decided that I should do something spontaneous. I thought maybe a long walk would be nice in that beautiful weather to the hills, where I had never been. But I wasn’t sure if I could manage it in that lunch break as half of it was already gone. So I thought maybe, I should be spontaneous tomorrow, and in that very moment, when I realized that I’m planning when to be spontaneous, I simply stood up and went on a walk. And it was amazing! I felt such a freedom I hadn’t felt for a pretty long time. I immediately decided to repeat this little trip the day after. So I did. And I went even further. I discovered a whole new world side of Gerze. 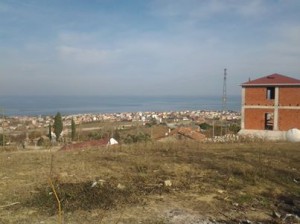 My weekend was pretty awesome too; I slept at Yagmur’s place and we had a fun time together! Her parents were really friendly, her mother’s cooking was just amazing! And I finally realized what it means, when Turks really mean “Eat more, please.” And as it was pretty awesome and they were so kind I didn’t want to disappoint them, I ate it all.

And now as I am finishing this update, there is no water in the whole city for two days, so I’m kinda starving for a shower, but who knows what tomorrow will bring.

I really would like to take a hike in those hills.

Thanks for inspiring me. Next time I am in town, i will go it!

Anything for your happiness master.