Boldi: “I just feel more and more motivated after these journeys” 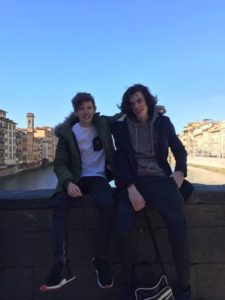 I traveled with an Erasmus+ project for the second time and I just feel more and more motivated after these journeys.

On the first day we met at the airport. We went to Rome first and from there, eight hours later we went to Pisa. We had a lot of time in Rome so we had to go to the city centre. Rome is the most beautiful city I have ever seen in my life. It is huge, but the social life of the city is similar to a little town. First we visited the Colosseum and we ate pizza there, it was delicious. The Colosseum was enormous, we took a lot of pictures there. Then we went to the Trevi fountain, it was also amazing. After that we had to go back to the airport and we flew to Pisa. When we arrived I was exhausted, but I was also excited to meet my host and his family, they were friendly and open from the first time.

On the second day when I woke up, I realized that I am in Italy and this feeling gave me energy for the whole day. We had to be in the school at eight o’clock in the morning, luckily I lived 5 minutes from the school. In the morning the Italians guided us around the school. Then every student from a foreign country had to talk about their country, city and school. After that we went sightseeing around Pisa, it was also amazing, but by the end of the day I was extremely tired. Everybody was sociable, so we didn’t have problems getting to know each other.

This day was our first project day. We talked about discrimination, prejudice and it was very interesting what their opinion about these things was. It was very nice that everybody took it seriously. In the afternoon we had a sport competition which contained volleyball, basketball, table tennis and juggling. My team didn’t win, but we had fun.

On the fourth day we went to Florence and we visited some of the most beautiful attractions. We went to the dome of Florence (Cattedrale di Sante Maria del Fiore) it was so enormous that I couldn’t even take a picture of the whole building. Then we went to the Santa Croce, Piazza della Signoria and to the Ponte Vecchio. Then we went up to a hill to watch the incredibly beautiful view of the city. We went back to Pisa, to home.

On the fifth day we had our second project day. We continued to talk about prejudices, but this time we had more activities. After that we had to close our eyes and listen to live music, then you could say what you imagined during the song. We also had to show some music from our country. After that we went to the theater of Pisa. We had some funny activity there. Then some of the people went home, but some of us stayed together and we went to eat pizza, then to drink coffee. After that I went with my host family to my host’s grandparents for dinner, he brought one of his friends, too. We ate lasagne, pork with potatoes and sorrel, a pudding, a cake and some fruit. Because everybody was tired we went home.

On the sixth day of the project we went to Lucca. It is a smaller city than Pisa and Lucca is famous for the fact that it hadn’t been concurred by anyone, except Napoleon. It is also interesting that in the middle of the city there is a round square, so the whole city’s shape is round. We went to a museum here and we visited a church, too. Then we had some free time to buy souvenirs and eat our lunch. At the end of the day the Italians took us to eat pizza. Shortly after we had to say good bye to each other, which is always a sad thing.

On the last day of the project I had to wake up a bit earlier, because our plane took off at eight o’clock. We had fifty minutes to go to the other plane, which took us to Budapest.

This week was a great experience for me. I learned a lot about Italy and I made friends with everybody.  I am sure we are going to keep in touch. Everybody was extremely friendly and I’m already missing the attitude of the project.