Simon: “This event changed my life, in a really really positive way” 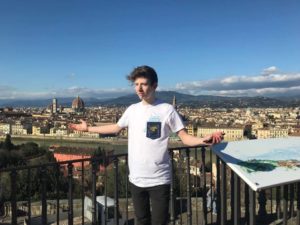 I always wanted to go to an Erasmus event, but eventually I didn’t take any of the previous chances, because of some pointless reasons. Only now I realized how awesome an Erasmus journey is. Fortunately, I got chosen to the Italian trip, which I wanted to go the most.
On Sunday morning, we met up at the airport with two of my schoolmates, and two teachers. We took the plane to the beautiful Rome, where we had 8 hours before the plane going to Pisa. Obviously, we went in to the centre, and watched that incredible city. First, we went to the Colosseum, where we ate a delicious pizza, and then we walked to the Trevi-fountain. At around nine o’clock, our second flight took off towards Pisa. By the time we arrived, our host families were already waiting for us to take us to their homes.
We had to get to the school by 8 o’clock in the morning. We lived in Camaiore, which was a city approximately 30 minutes from the school. We went to school by train. First, we had a school tour. They showed us everything. After that, every country showed their presentations of their cities and school. Then, the Italian guys took us to a place where we could choose between pizza and kebab for lunch. In the afternoon, they showed us around Pisa, which is a really epic city.
On the third day of our trip, we started the day with a workshop about prejudice and stereotypes. It was pretty interesting, and made us think a little bit. After having our lunch in the city, we went to the school gym, where everyone got qualified in groups, and we had volleyball, basketball, table tennis, and jugglery matches. By the way, our team was the winner one.
The fourth day was spent in Florence, where we went by train. We visited the biggest attractions, saw the Statue of David, walked through that famous bridge, and we also hiked up to the Piazza of Michelangelo, where we had an incredible view to the city.
The next day we had another workshop, where we continued the debate about the themes we discussed two days ago. Then we ate from the foods everyone carried from their countries, and every nation played their songs they brought. The afternoon activity was the theatre. We went to that beautiful place, where they organized us a kind of acting class. We all really enjoyed it. I can not really explain why, but this was my favourite day.
On our last entire day in Italy, we visited another historical city called Lucca. We walked around the city, and we also went to a museum. In the evening, the local kids took us to a pizzeria to celebrate our awesome week. We were all extremely sad knowing  that was our last day together.
We had to get up at 4 in the morning to get to the airport in time. The plane went to Rome first, but this time, we did not have that much time to go in the city, so we almost immediately caught the other plane going back to Budapest.
I am honest, this week was the best trip of my whole life. I made a lot of new friends who I hope to stay in contact with, learned about other cultures and other countries. I got to know how they live, and how friendly they are, and last but not least, I could eventually decide that I want to learn Italian. This event changed my life, in a really really positive way.
Simon Kaucsek