Our group from Poli took part in a youth exchange in Croatia. The goal of the exchange was to have international debate sessions (Karl Popper’s technique) about the refugees.

From April, 10 of us have been preparing for this journey (students: Dorka, Lea, Noémi, Panni, Veri, Balázs, Péter, Tamás and 2 leaders: Anna and me, Kati). We are all of us are interested in refugee crisis, so we had some meeting to share knowledge about the Hungarian situation.

Our team arrived from Hungary by bus to Zagreb around 14 o’clock. There was a little misunderstanding: because of the football worldcup, the entire city was crowded, but we luckily met the Croatian project leader, Vesna and her team at the railway station.

Soon we met the whole Croatian team, and we headed together to Fuzine.

The other participants from different countries (from Lithuania, Estonia, Poland) have been late. Some of them arrived later, in the afternoon, some of them the next day.

That is why the programmes of the exchange have been mixed up a little, and our leader Vesna has decided that in spite the circumstances, we would go through the whole welcoming programme. So we did.

But we should admit that the whole Croatian youngster team did a great job during the week. They started the programmes with welcoming games, and they were working hard till the very last evening.

They won the success of the exchange!!! They have taught us how to debate properly, and many people in our team have learnt it well.

We had debate runs after a couple of days of practice, and me and Anna proudly watched – as judges – our team’s refined abilities to lead and sometimes even win a debate.

It was hard work to get to this point for our team and for the Croatian teens too, but they succeeded. Everyone improved their skills in communication, built up speeches in English to take an active part in their team. And, we have learnt about hijab, niqab, and some things about how each participating country treats the refugees.

And of course, some unique facts about these countries, some words, some traditional songs, some dances.

Some day we had some pleasure too. On Thursday, we went for a short trip to the beach of the Adriatic sea, on the island of Krk, it was short but gorgeous!

And some evenings, we had fun during the international nights, we even danced.

There we strength and weakness too during this exchange. The strength was our great team, the Lithuanians’, the Croatian participants and some Estonians and Polish too.

The weakness of this exchange was that our leader’s communicational manners and handling tricky situations never led to a peaceful solution. This kind of verbal behaviour has killed the good atmosphere of several events.

But stills, we had very good moments too.

We would happily share our knowledge in debate for the people in Poli, so we are looking forward to find moments for it! 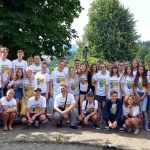 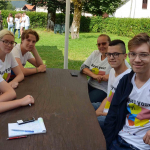 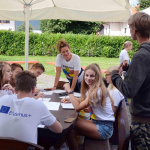 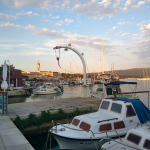 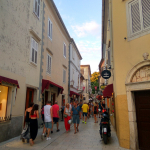 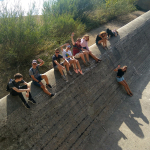 “The main aim of this erasmus plus programme was to learn how to debate. We had several workshops where first they told us the rules and we practiced. After a few days we could write our own speeches and debate against each other in groups which was quiet fun sometimes.
In a nutshell i’m very greatful for this opportunity i’ve learnt new things made new friends and enjoyed myself in a beautiful and international environment.”

“We were in a beautiful place, with a very good view, but because of the too many workshops that we have done, there was no time to walk or just chill in this lovely view.
All the participants were nice, friendly, open-minded and in this project everybody had a very good English but because of the too many workshops, sadly we didn’t had enough time to make some new friends.”

“This was my second Eramsus+ project and personally i liked it but I think it could’ve been better. Sadly, we didn’t really have enough free time to really get to know each other, but we used every single moment of it. We have learned about other cultures, new languages and traditions from the others. The schedule of this program was tough, we had to prepare ourselves mentally to debate, to learn how to brainstorm and help each other out with information. The Croatian guys were really lovely and helpful with us; they’ve really become our mentors during this whole week.”

“We also had cultural nights where each country had the chance to present their nation. We had a lot of fun, we danced around, we had quizes and snacks from each country and even sang together the most random songs while standing in a circle and just enjoying the company of the others. Last night, we had a farewell party which turned into a really funny karaoke dance night that included shouting out the lyrics of 2000’s songs.
All in all, I am extremely grateful for this experience, I’ve made new friends and made experiences that I will never forget.”

“The main goal of the project was the debating competition during last two days. We were in mixed, international groups, and we had to make debates in different topics, against another group. It was nice to try out something new in this kind of situation, out of our comfort zone.”

“Our schedule for the week was pretty strict, so during the day we weren’t able to socialize with them, but in the evening or in our short breaks we managed to become really good friends with some of them. But the main aim of this project was not making friends or having fun (at least according to the project leader), but to learn and debate about serious topics like migration. I think we learned a lot of important skills and I actually enjoyed the part when we were debating a lot, but the best memory of the trip was one evening when around 20 people from the programme stayed in the main hall and danced and sang to popular songs together.”