My experiences with CHoC in Barcelona

When we first arrived the airport in Barcelona the first thing came to my ind was that it’s really hot. I don’t mean really really hot but on-eared to home it was very nice. We met the hosting families and went to their home. Shortly about the family: everyone was really kind, they spoke English well and the whole time I felt home because of their welcoming and charming behaviour, for this week I really was a part of the family not just a guest.

The programs topic was something I didn’t know much about so I came to learn, and in the end I

did even if sometimes I thought I won’t. The tasks could be kind of exhausting but it was okay

was reaally boring, but when we were recording an „advertisement” for chocolate in general it

was exciting. I enjoyed it a lot.

This was my second trip to Barcelona and the first one was also with an Erasmus+ project also with this school. Even though I’ve been there it was really nice to come back to this awesome city and to this school.

The programs were mostly interesting and enjoyable it was really nice to dive into the details of the history of chocolate and i learned a lot of interesting facts and it also verified what i already knew. I’ve tasted a lot of different kinds of chocolate and i learned that how different factors affects the taste of it. I’ve met a lot of wonderful new people and i also met some old friends. My host and his family was really generous and i couldn’t have wished for better treatment, and i hope that i can pay back they kindness back in some way.

I had a wonderful time and i wish that i could have spent more time there.

Luckily I’ve been chosen to travel to Barcelona with the Choch project. Because It isn’t my first project and my first travel with Erasmus I went to Barcelona like I knew I’ll have a great time, an amazing week with lots of people from other countries.

We had lots of activities with international groups which I personally find very imaginative and useful for my English skills. If I have to choose my two favorite activities from the week I would choose the Colombus footsteps and Chocolate tasting.

When I knew that I was going to Barcelona, I knew immediately that I would enjoy that one week. What happened this week?

We departed from Hungary on January 11th. Our plane took off at 6 in the morning. Two hours later we were talking to our hosts at Barcelona airport. After that everyone went home. When I arrived my host’s place they showed me the house and we sat down for lunch. In the afternoon we met inside the city and we went over the house of one of the Hungarian hosts. We met some Catalan who weren’t in the project. They were very nice. Sunday we went to Barcelona because the project just started in Monday. So we saw the beach and the city. It was very beautiful. Monday morning started the work but before we saw the school. The school is enormous and incredible. They have a swimming pool. After that we saw a presentation about cocoa beans and pre-Columbian civilizations. The second day we went to Barcelona a chocolate tour. I think it was very funny and interesting. Our task was to find some stores and ask what their most popular products. When the chocolate tour finished we went to the museum but it was little bit boring. The last activity of the day was to follow Columbus footstep. We play this game with seppo. It was interesting. In Wednesday we saw a person house how made a chocolate in Barcelona. And this was the day when we taste chocolate in the chocolate manufactory. The chocolate was very-very taste but I ate a lot so my stomach hurt but it was the most exciting day for me. The fourth day we took the bus and we went to Vallbona. The first stop was the Torrons museum in Lleida. Here we knew how to make the famous stone chocolate. Next stop was the Monastery of Santa Maria in Vallbona. We listened to how they lived in this monastery and what happened to them. The last day of the project we made some pre-Columbian symbols and we created chocolate bar from clay. These activities were funny.

Overall I enjoyed the week a lot, met a lot of new people and I look forward to the meeting in Hungary.

I really enjoyed this erasmus project. I chose to travel to Barcelona, because I love Gaudí, and my sister used to learn spanish, and was able to play the spanish national anthem on flute, so I have a lot of good memories connected to Barcelona .My host was a really nice girl, and her mom and dad were really gentle as well.

Most of the days, the programmes started at the school, which I thought would be a little though, because my host family lived pretty far from Barcelona, in a town called Torelles de Llobregat. But than I enjoyeed the bus ride as well, because we saw the sunrise. And I loved the town, it was very quiet, and the air was very fresh there. My host’s mother made us orange juice every morning. On my first day, my host (her name was Mariona) showed me a little hill, very close to their house. It was amazing, From there, we could see the whole town, and she showed me which building was her previous school.

I enjoyed most of the programmes, especially when we had to make a chocolate bar from clay, and when we visited the chocolate factory. I bought three bars of chocolate there, and one pack of white chocolate with almonds. I’m not a hundred percent sure it was chocolate, because its texture was harder.  Anyway, both my family and I really liked them all, there’s nothing left by now.

Everyone was really kind and opened with me, although I’m a bit shy. At first it wasn’t easy, but now I’m glad I participated. My talking skill improved, obviously mostly in english. I’m in another project as well, and after this experience I’m looking forward to that a lot.

Overall I really enjoyed this chocolate project in Barcelona. I had a chance to take a closer look into the catalan traditions, and people live their average day in Spain. Of course i could also learn more about the chocolate history.

For me at the first look it was very strange that our hosts are going to be almost three years younger than us. But eventually it was not a problem at all. We all had a great time, and its my personall opinion, but my hosts family was really nice and helpful. People from the other countries were also very nice.

About the daily programs: i think they lasted them too late every day. At the end of every they i was very very exhausted, we had less free time hanging out. Also some programs were i think a little pointless. Regarding when we had to do that ’In Columbus’ footprint’ i had no idea what are we even looking for, and we had to wait because application was not working. Or when we had to make researches about our own country history, than we had to make presentations about them, eventually we did not present any of them. We had the same thing about the commercial we had to make. Despite these things, i really enjoyed working with the others although we haven’t really done anything with them after we have done them. But the majority of the programs were really good, and i could learn a lot from them. Especially liked the tour to the chocolate factories, and the chocolate tastings.

So in overall i had a really good time in Barcelona on that one week and i am very grateful that i could go there and take a part in the project.

That was my first Erasmus+ project, and I really enjoyed it. I learned a lot about the history of the chocolate and Columbus. My favorite program was the chocolate tasting. This week was really useful for my English skills, and for my knowledge about chocolate. 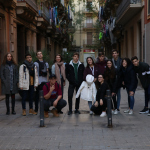 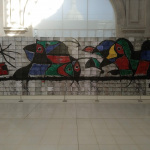 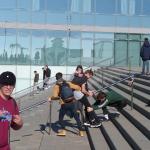 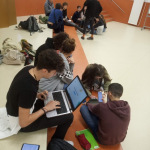 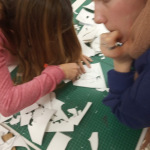 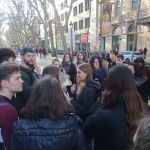 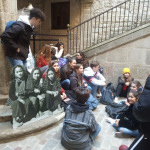