This project was a big experience for me. I learned a lot about Croatia, and Zagreb, and it was fun to be with Macedonian, Bulgarian, and Croatian people. I got to know about their cultures, and I spoke with them about interesting historical questions. It was also good, that I could see the differences between these cultures. I think my communication in English improved a lot, and I’m more confident about speaking, and communicate with different people. I participated in a lot of workshops, and I organized workshops as well. In these programs I spoke, and I got to know others opinion about bullying, violence, refugees, Romas, and problems. I made friendships, also with Hungarians, that was the best. 10 days were maybe too much for that project with this topic, and we had problems, and adventures, but I had a great time in Zagreb with this team.

The projects main theme was bullying and the reasons behind it. Our task, working together with our partners, was to talk about these issues and present some that were the most common in our respective countries. We had workshops on religious, cultural and other minorities that might be targeted, we debated ways of how protect these groups from being bullied. Every day consisted of four, 90 minute workshops that were facilitated by one of the partner countries. My favorite was the one about the Roma people. After these workshops we had most evenings free or had some other activities, that included doing a sightseeing tour with some fun tasks or meeting actual refugees who told us about their story . One problem was that our Bulgarian partners did not speak English so it was almost impossible to communicate with them properly. Despite that and a few other minor problems I really enjoyed working in this project.

In the next few sentences I will talk about the Stop bullying project at Croatia. For first let’s speak about the mates. This erasmus included a Hungarian a Croatian a Macedonian and a Bulgarian group. Everybody was open minded but unfortunately the Bulgarian dudes did not speak english. It caused dificulties but we could handle this problem.

Most of the days we had four 1.5 hour work shops. All the countries orgenised programes there, as energisers, playes and plenty others. We stayed at a dorm near to the city center, so we went into Zagreb main square daily. For the afternoon we were free, so we had the oportunaty to go swimming or do whatever we want. The only one thing that ruined this project is the unmature behavior of the Bulgarians, that made the project unlikeable for meny girls. Overall I liked this 10 days and the most of us did.

So youth exchange, honestly i didn’t have high expectations when I signed up for the project but overall it turned out to be realy good. The exchange was about Stop bullying, which was an interesting topic aswell. For me this 10 days that we were in zagreb felt much much longer than it actually was, but don’t get me wrong I enjoyed the most of it. It was really fun and interesting getting to know other people and their thoughts on this topic, and it was great learning experience. It was interesting pwhen other countries told us what types of bullying is the most commom inside their country. I’m happy I’ve chosen to come to the exchange because I know understand how to notice problems and how to help or send help for those in need. Overall this 10 days were really awesome and I really recommend trying out youth exchanges, even of he topic is not that interesting because its a free trip to another country.

It was my first Erasmus experience abroad and I am not disappointed. I got to know pretty nice people from Hungary and from the other countries too. I loved my team even the teachers. We had a lot of fun, they made me laugh many times and I’m thankful for that. In my opinion we couldn’t ask for better teachers. I had the opportunity getting to know Rico, plus Rob is always a good choice. Actually the most people who I liked were in my group but I met girls and boys who I had great conversations with. I even met people who I also want to be in Hungary with having more time together. I’m really gonna miss them.

I loved living in a dorm, I found it pretty fancy. We had our own room, fridge and things like that with one of my best friends and I just loved it. We were kindda free. We could go anywhere actually when we had no workshop.

Alright I hated the food that they gave me, but it wasn’t a big surprise. I can’t blame them, it just made me feel bad and tired sometimes.

The big deal was my mental health to be honest. I hadn’t have counted with that much anxiety. But I survived. Kindda. The most important thing is that I had new friends and new experiences. And I’m happy for that.

Let’s start with number one, we had a lot of workshops related to any kind of bullying. Almost all of them were enjoyable, my favourite was the refugee workshop, when we could talk to Sirian refugees about their journey, past or present everyday life.

Number two, was the best surprise in the whole project. We didn’t really know each other at the beginning but now I am glad to say, friendships started in this exchange project. Our team formed into an enormously funny society, it was easy to work with them or to just hang out with them. I have to say thanks to our marvelous leaders (Rico and Rob <3) for their inexhaustible patience and humour.

And last but not least, let’s write something about the whole team. I will start with the negativities we went through. None of the bulgarians could speak English, it was impossible to communicate with them. There were alcohol and sexual harassment problems/scandals, one of the bulgarians even got kicked out of the project. Otherwise the other participants were really really helpful and easy to communicate with, good tastes of humours. No one was alone in this project, everybody found friends or enemies, there was a general good mood in the hall. Always.

It was my first erasmus trip, but I would say for sure that I am going to join other projects. These projects are really good for learning social skills. Skills you would never learn. The only reason why I don’t recommend you to join to an eramus projects is to ensure space available for me.

If I have to summarize this trip into one sentence, that it was freaking awesome. The organization, the programs, the hosts were superb! Tons of programs perfectly organized. Thank you Erasmus, it was great!

The main organizer, Ivan was wonderful , and always there to help, even when we woke him up at midnight .

The Croatian girls always did their best to make us understand the topics and what we have to do . They presented some of the best games and workshops. I really appreciated all the work they put in this project and all of the details.

My five  up’s : I made new friends from every country, ( not to brag, but) the Hungarian refugee workshop , video making about bullying and stereotypes, all of the workshops on the first two days, the dorm ( it was really pretty and clean) .

My three downs: as a vegetarian the food was really disappointing, they did their best, but it had nothing in it but fat and carb , the lack of nutrients made my skin peel off of me throughout the 10 days. The sleeping schedule, it was impossible to sleep more than 7 hours, so it would be nice if we would start at 9:30-10:00 instead of 8:30 , because if I have to eat and get dressed then it is very tiring in a long term especially when the food also lacks all nutrients. My body died. My last complaint is about language barriers , it made the whole project really difficult that only one of the Bulgarians knew English, we always had to think about how to manage to include them without them understanding anything.

It was a good project altogether, if this 3 mistakes wouldn’t be it would be perfect.

This project was an interesting experience. It would have made for good material for a documentary about teenagers spending 10 days in a dorm together.

I didn’t learn many new things about bullying and how to stop it, but I did learn a lot about people. I learned that people can surprise you in ways that you would never expect. I’ve experienced that in many positive happenings, and in one very negative event. But the weight of that one thing brought many of my peers positive traits to the surface, for which I am very grateful.

As for the workshops, they didn’t really hold new information for me, since we have many similar discussions in school. I don’t mean to sound full of ourselves, favorite workshop is the one we did on refugees. It was interesting to see the “jail experiment” like way everyone started acting, and I genuinely felt how physically and mentally taxing it is to act like a, let’s say, mean person, for even 3 hours. Other than that I felt like everyone could enjoyed the workshop, even the Bulgarians who had trouble participating due to the fact that they didn’t speak English.

Next to the many interesting workshops there were some that felt kind of forced even though the topic could have been conveyed in a lot of more interesting ways. For example, we were on a project against bullying and thinking with prejudices and instead of going to the Pride happening one day, we went on a city run.

Over all I enjoyed this project a lot, and I hope there will be many more similar to this one, because we as a society still need to discuss things like this.

So I really liked this project. I was curious about how the other countries going to talk about this topic. I was very happy when most of the kids were open minded and talked about everything we had to.

There were a few problems. First one of the countries didn’t speak any English only one guy. So the others didn’t take place in any workshops. Which I think is very sad and disappointing. Though the other countries were very good at English. I liked most of the workshops. I was satisfied. 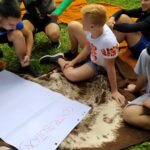 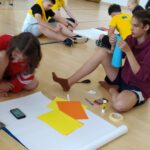 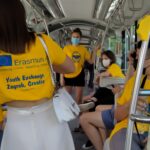 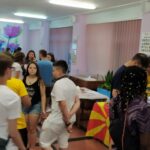 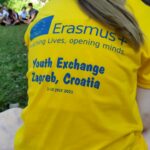 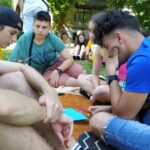 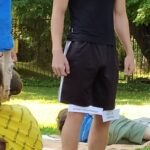 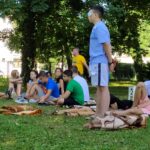 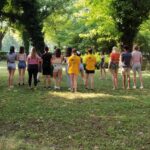 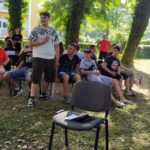 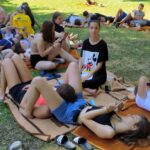