Stopped Bullies in their Tracks, Erasmus+ Project in Zagreb, Croatia

The project was entitled Stop Bullying. A Youth Exchange with a lot of workshops run by the young participants. So much better than just frontal, presentations the whole time. Each of the four nations were in charge of various aspects of bullying and how to stop it. These workshops ranged from religious minorities to refugees, from cyber bullying to peer-to-peer bullying in say, school.

The entire project we setup extremely well. The leader, Ivan obviously knows what he is doing and takes his task seriously, but we could tell this just from the correspondence leading up to the project. Ivan did not fail. He actually went above and beyond in handling the numerous issues that arose.  In other words, an extremely well planned project and any and all hurdles were overcome, with from our vantage point, ease. Though, we know some were far from easy to handle.

One issue that was ever present was language/communication skills. One partner was not up to par on this front; only one of their participants could actually communicate in English. Ivan constantly was making minor adjustments to accommodate for this. Using a barrage of languages to get the point of a given workshop across, or to make sure the rules were clearly understood by all. He held nearly all the workshops in the shady courtyard of the dormitory we were based in. It was far cooler there than any room inside. Ivan also allowed some workshops to be moved around to help participants.

This flexibility, openness and willing to help ended up trickling down to each team in the workshops they ran. The Hungarian team for example, spent a few extra hours revamping one of the workshops to make sure we could facilitate the language barrier. We also ran a double workshop on refugees. This also required a few hours extra work to restructure the original idea. The Macedonians had to switch their material from a digital, frontal presentation to an interactive one using informal methods. The Croatians changed up their workshops to work in the outdoor environment, the Bulgarians put together a workshop on self-defense where language issues were minimized. Without Ivan’s commitment and personality, many of us may have not been so successful.

Though not all went well. One participant had a very different idea what he is allowed to do with other participants. Trying to kiss a girl, grabbing her behind, etc. Strange behavior in an anti-bullying project. Several participants woke up Ivan to tell him. Ivan took action immediately, kicking out the young man and sending one of his team leaders to a hostel. When he returned from taking the to the new place he had a long talk with his team, we spoke with our team. A few our our girls spoke to the victim to help her. The morning workshops were postponed by an hour. Rather than giving the entire morning off, as many participants had wanted, Ivan held a workshop and spoke about an incident where he bullied somebody as a kid and how it effected him, how it was handled, etc. Rather than preaching a sermon on why bullying is bad, he lead by example and it was greatly received by the participants. They were thankful and happy.

All in all, it was a great project. Many of the participants are planning to visit each other’s countries. Hopefully we will get to work with these partners again.

Hats to of the Hungarian participants, they were exceptionally good! And to Ivan as well! 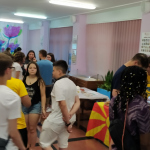 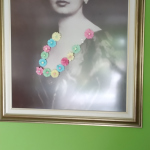 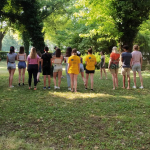 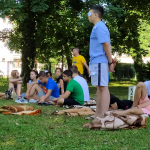 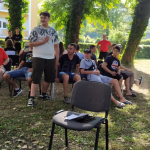 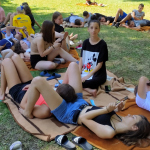