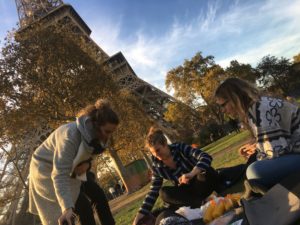 First we went to Paris and we spent a night there. We slept in an Airbnb apartment and hada big sightseeing tour on Saturday. We landed with the airplane at 9 o’clock. We put our stuff to the flat and then went to the city.

First we went to a Cafe and had a breakfast. We ate a typical French breakfast. Croissant, toast, orange juice and coffee. Then we went to the Arc de Triomphe, we walked and talked a lot.

We decided to buy something in a store and have a nice picnic next to the Eiffel tower. We had a really nice weather it was a bit cold but we could do the picnic. After that we walked and took the bus to the Sacre Coeur. Paris is a big mess. When we went to the Airbnb de train did not work at this time the underground had problem. It was a really big fun. We laughed a lot. When we arrived to the Sacre Coeur it was already dark. We had a pretty nice view from there. Behind the Sacre Coeur there is a bohemian district. We had a tea because we were really cold. Réka knew a place which is known by the local people. They decorated this place with painting and with mosaics. It was a really nice place and we had now a great view too but now with less people. Then we went home, we were extremely exhausted.

Sunday we didn’t have too much time. We checked the Notre Dame and the Latin district. We walked the coast of Sein. After that we grabbed our stuff and we went to the railway station. To got to the TGV was quite difficult, we had to change in Metz. Then we arrived to Saint-Avold and we met our hosts. (Zsófi) 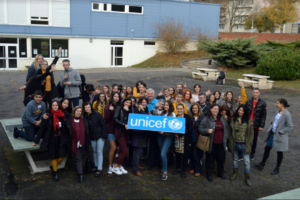 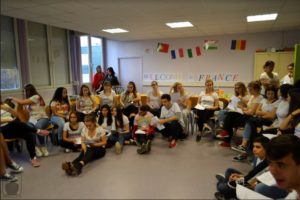 That was the first day of the official program. We woke up and went to school with our hosts for the first time. We had to arrive at 8 o’clock and meet the other students in a classroom. The main French teacher said a few words and welcomed us, then we continued the day with a few ice breaking games. After that we got a list of the students from abroad in three teams, everyone was a pair with their hosts. We had three workshops to do, for my team the first one was an escape game, we had one hour to get out of the three rooms by working together and finding the keys. The second one was painting T-shirts, we had words connecting to the project and we painted them on the shirt with color spray. The third one was a kahoot game about famous women mathematicians in the world. First, we read about them in a little exhibition, that was made by the French team, then we played the game. Afterwards we had  lunch break in the town with the other students. Then we went to have a treasure hunt in Saint-Avold. As the last program of the day, we met the mayor at the town hall and made pictures and talked with him.

This day UNICEF volunteers came and presented for us about gender discrimination, afterwards we had some games using this topic. The next part of this day was one of the most important tasks we had to do this week, every country had to talk about a woman from their country, who did great things.

Our other main mission for the week was to make a song together, we started to write the verse of the song that day before lunch. After all the presentations, we had a longer lunch break in the school canteen.

Then in teams we played basketball in wheelchairs. That program was one of my favorites, because it was entertaining and we could feel and find out how is it to be disabled for a short time. At night we went to play bowling with all the students and teachers from the program.

On Wednesday the group went to Metz by bus. We had a sightseeing tour there, that was guided by the French team. Afterwards we had a lunch break and a longer shopping time before we went to “The adventures of the colours” exhibition of the Pompidou museum.

First, we had a guided tour in the museum, we heard about paintings and their stories, then also in the museum we had time in the relax and board room. The first one was a big room with white walls and carpet, but full of pink lights and music, the second one’s walls were like school boards, where we could write messages, draw on the walls. Then the bus took us back to Saint-Avold as the end of our day. (Dorci) 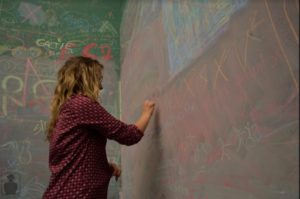 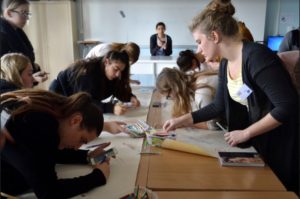 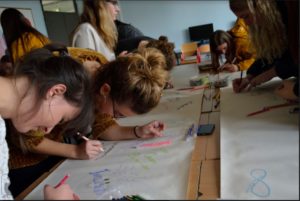 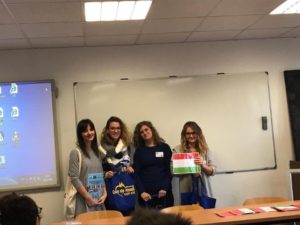 On Thursday morning we met at the school at around 8 o’clock. It was always comforting to see that everyone else’s face was just as tired as ours. Although, my host had a car so if we had to go anywhere we enjoyed the luxury of not having to take the bus at 5 am which was pretty awesome. Also, after listening to the music at maximum volume while watching the Sun coming up between the French mountains did actually put me in a way better mood, those car trips were awesome. In the school, two volunteers from UNICEF gave us presentations on the topic of the right to education. We also had some role plays and had to discuss some serious problems concerning those who don’t get the chance to study and those who live in horrible circumstances. We also talked about how we could strive for high quality education and what a child friendly school meant to us. These were extremely interesting topics and even though we didn’t have much time to elaborate on them, I really enjoyed it. Thursday was the day of making the protest song, writing the chorus all together and recording the final work. We spent plenty of time working on it, had several rehearsals and after a long journey we finally managed to create and to record our own protest song. In the evening, some of us went to a trampoline park which was so much fun, we laughed a lot and to my biggest surprise, got tired after like half an hour. Let’s just say that at that point, 60% of my body was croissants. That explains everything.

On Friday, we all took a bus and went to the US cemetery where we had a guided tour and then took the road to Germany. Saint-Avold is really close to the German border so it only took about half an hour to get there. We visited an exhibition which was about Queen Elizabeth the second and then went to Sarrebruck where we did some sightseeing. We spent the afternoon there, we had some free time and also had lunch and then we all went back to Saint-Avold. Everyone had some free time and the chance to rest a bit and then the students went to a Mexican restaurant. At that point I basically couldn’t look at food anymore because I ate so much during the week that there was just simply no more place in me for more food. But anyway, it was awesome and was really good to hang out with the others. And after that, as a final farewell, we went back to Sarrebruck and spent some time in a shisha bar which was a lot of fun. Then we said our goodbyes and headed home after a long but great day.

On Saturday, I took the last car trip in the sunrise with my awesome host because Saturday morning was the time when we had to left Saint-Avold. We said our last goodbyes and hopped on the train which took us back to Paris. We were so tired that we could basically fall asleep on the floor of the train. We arrived at Paris around 10 and had a coffee in a typical French café. That was probably the only thing that kept us awake. As it was raining cats and dogs, unfortunately, we didn’t have the chance to just wander around. Although we did take a beautiful walk next to the Seine in pouring rain, it was lovely, we saw a different face of Paris which was just as magnifique as the one without rain. Given the fact that at this point we were basically walking deads we decided to go to the airport. So we had our last RER trip which was just as surreal but at the same time awesome as the rest of our journey. We were never bored, not for a second, we had an amazing time and got the chance to discover other cultures, cities and acquire a great knowledge. And last but not least, we got to know each other and made friendships that might last for a lifetime. All in all, I am so grateful for getting the chance to participate in this project and for this whole journey, I will never forget these experiences.