I was so over the moon, when we got on the bus Sunday midnight. I was happy to ‘run away’ from reality for a few days. When we left Gerze, we thought it will be a boring 6 hours long bus trip. Well, it wasn’t. Not at all.

At first I felt lucky to have two seats to lie on, it was pretty comfortable (as it can be) and as I took the first two seats, I’ve seen everything on a wide screen. But it was too good to be true. At half past three (a.m. of course) I noticed that the bus was moving way more slowly than it was reasonable. As the road wasn’t in a bad condition, I couldn’t imagine what the reason was for it, tough I found out soon. When I decided to go back to sleep, I heard a sound of explosion and saw an orange lightning. Immediately smoke started to come out of the bus’ engine, which was located at the end of it. As I was in the front I didn’t really understand what was going on. By the time I got up the people from the end of the bus were running out and I was like “What the hell is going on with you guys?” Then I heard our mentor teacher saying “Something is burning.” And then I realized. A little alarm bell started to ring in my head like “oh-oh, it’s a really oh-oh situation.” Suddenly the Discovery Channel turned on in my head, showing if a car’s engine starts to burn, in a minute or two it usually explodes. My only thought was “Laura, if the bus explodes, please doesn’t be on it!” So I jumped out of the bus in a T-shirt and in socks as I didn’t even have the time to jump in my shoes properly.

It took only 10 seconds to realize the absurdity of the situation, and we burst out in laughing. Though the engine was smoking like hell, it was a way less serious happening as we thought at first. We were laughing while we stood in the middle of nowhere under the stars, in the middle of the night, in 5°C, me with only a T-shirt on. Though it was beautiful, when I assured that nothing was going to explode I got back on the bus, but I couldn’t stay as the smoke was really ‘heavy’, so at least I put on my coat and went out again. 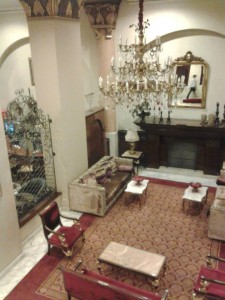 Fortunately, as there’s a lot of bus during the night (to avoid the traffic of the day), a random bus stopped and took us to Ankara. So when we arrived to the capital of our nation at 6 o’clock in the morning I was walking around like a zombie. Luckily we took a taxi to the hotel, not the public transport. When we got out of the car I thought we must be at a wrong hotel, ‘cause what I saw, a ‘five star miracle’ couldn’t be ours. But it was! As we entered the hall I was astonished by what I’ve seen. It was a huge medieval palace from the inside with red velvet furniture, paintings on the walls and gold…like everywhere. It may be considered as fussy, but for me- a true princess in heart- it was a dream of a lifetime! It even turned out, that everybody has separated rooms! And what a room was that! When I first got in, I was so amused that I even forgot what time we agreed on to have breakfast. I only knew that I don’t have to hurry so I explored my whole room inch by inch and when I was done, I took a huge shower. It was a-ma-zing! So as the breakfast and all the other meals we had during our stay. I probably put on some weight. But I needed the energy as we had looooong days ahead of us. Actually the meetings were pretty good- probably that was the biggest surprise. 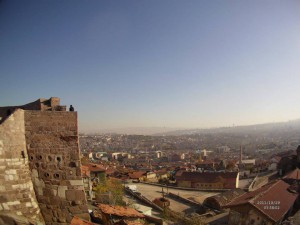 Afterwards we went on sightseeing, we’ve been to Atatürk’s mausoleum and Ankara Castle, they both were awesome, and they kinda changed my opinion on Ankara. It isn’t just a concrete block as I first thought, it do have nice parts too. As a result I was a bit sad, when the hour of leaving has arrived. I wish we could stay for a day or two more, it would have been perfect! But you can’t always get what you want. It was awesome anyway. Now where’re back in reality again, it only took me 11 hours of sleeping to recover.

This week’s phrase should’ve been a Turkish proverb, which was mentioned during one of the meetings, but unfortunately they only told us the English form of it, and I couldn’t find it on the internet. So just in English, but here it is: If you don’t have faith in your future, you don’t have one.