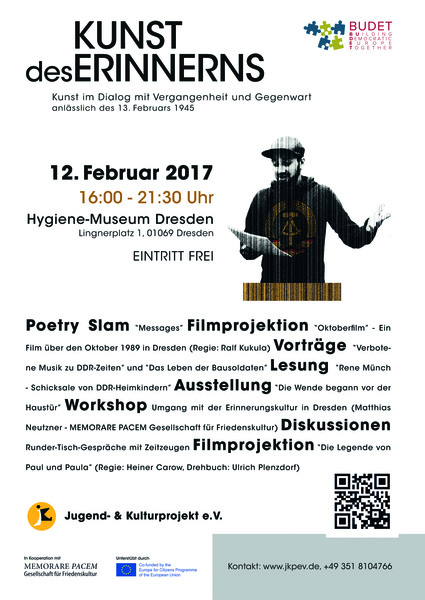 It presented the “Peaceful Revolution” and the movements helped by the Lutheran Church during the GDR times in the 1970s and 1980s.

During the event, former activists, victims of the GDR, former Mayors and Zwangsarbeiter shared their experiences with young people who do not have any memories of that time. Interactive workshops by Adrian Matus and Matthias Neutzner about the historical background were also facilitated so that Dresden’s citizens and international participants are actively involved and share their opinions and knowledge. Furthermore, study-visits to Münchner Platz and Gedenkstätte Bautzner Straße Dresden were held. The public event included presentations by locals about forbidden music during the GDR times, the memories and experiences of Rene Münch, the documentary film “Oktoberfilm”, an exhibition „Die Wende begann vor der Haustür“ – The change began on the doorstep” and  reciting poetry “Messages”.